On this first Saturday afternoon of the New Year we enjoyed taking advantage of the balmy sunny weather for a 6-1/2-mile exploration of some of DeKalb County's most popular parklands. Kicked off our adventure by hiking from Mason Mill Park to Emory's Lullwater Preserve.  A beautiful new PATH spur trail & boardwalk took us underneath Clairmont Rd to a convenient shortcut to Emory's trails, directly along the creek bank just south of the VA Hospital.  On the Emory campus miles of shady trails branch in all directions from the grounds of the "Lullwater House" mansion overlooking Candler Lake.  Built in the mid-1920s by the son of Coca-Cola magnate Asa Candler, it has been the successive home of Emory's presidents since 1963.  After a stop at the waterfall behind the mansion it was exciting to take the long steel swinging bridge to the far side of the creek and go inside the quaint creekside stone tower that had been a key part of Candlers' 1920s hydroelectric generating system.
After re-crossing the footbridge we took the P'tree Creek trail a half mile westward and underneath the Houston Mill Rd bridge to Hahn Woods.  While  exploring its beautiful terrain we admired the PATH foundation's progress in extending its Emory "double-wide" trail network a mile or more along the north side of the creek toward Wesley Woods.
We next climbed from the creek near Hahn Woods up a steep jungle-like trail that boasts a "hidden gem" - the still-flowing spring and cisterns that supplied fresh water to the historic Houston Mill House high atop the hill.

After a break beside at the Houston family's

millstone fountain we hiked back to the president's mansion grounds via a single-track trail through the woods just uphill of Yerkes Primate Center.  We then climbed the panoramic hill that  surrounds Lullwater House, where thanks to Suzy's sharp ears we spotted a pair of beautiful red-crested Pileated Woodpeckers pecking away and vocalizing atop the nearby tall hardwoods. 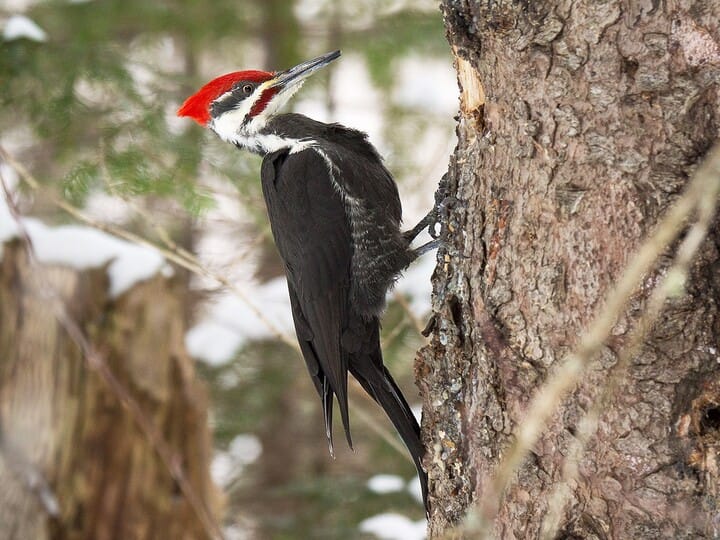 Next on our itinerary was Ira Melton Park, whose trails at normal water levels can be easily accessed from Mason Mill Park by taking stepping stones over the creek.  Due to high water this time we reached Ira Melton via sidewalks from Clairmont Rd, and had a rare and unusual "treat" along the way.  Turns out there's a famous 200-pound potbellied pig who, like a lazy family dog, hangs out unpenned and unleashed in the yard of his owners at the corner of Desmond & Willivee.

We got big kick out of that pig who paid little attention to us as we snapped away with our smartphones.
Had no problem social-distancing and following CDC guidelines regarding masks, etc.  It did our hearts good along the way to chat with dozens of other folks who were likewise out enjoying the fall splendor with their kids and furry friends.  Thanks to Linda for bringing her two friendly little canine companions to hike with us!  - Posted by Charlie, Sun Jan 3rd